The modern development of virtual museums is characterized by an increase in the complexity of these information resources and diversity in all areas. Digital initiatives, many of which were already implemented to some extent by the 2010s, continue to expand and develop.

National policies for cultural heritage and the implementation of large joint projects continue to play a significant role in the evolution of the GLAM sector’s information environment.

The development of national infrastructure has been accompanied by the extension of initiatives for the digitization of museum collections, and progressively digitized collections have been made available in the online environment. The Metropolitan Museum of Art demonstrates such progress in representation of electronic collections. The diagram based on data from the web archive shows that the number of digital objects has grown significantly in 2007-2012, increasing by more than 50 times when compared to the previous decade, and after 2013, the upward trend is sustained. 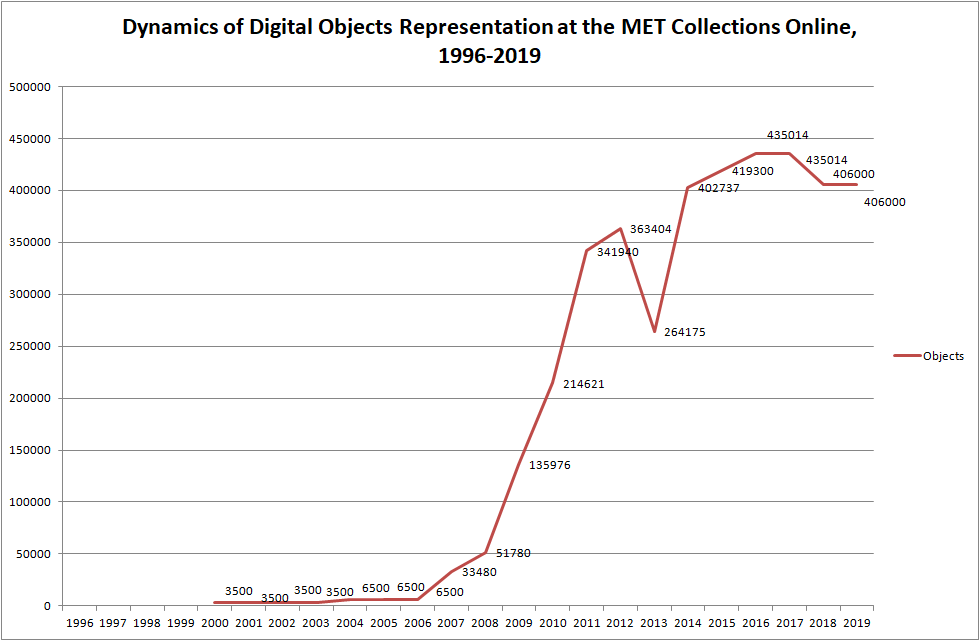 The massive representation of digital collections in virtual museums has also boosted the development of search forms for more accurate delivery of objects to the user. The parameters of objects and collections have become more diverse, and search forms have been organized in more sophisticated ways than the previous generation of retrieval systems. The search form on the Victoria & Albert Museum website is a good example of the implementation of a multi-component search. Requests on keywords and a limited set of metadata had been the standard for search forms of the 2000s and earlier. A similar system had been implemented on the museum’s website [1]. In the 2010s, the search form has been changed to allow greater variability of the initial characteristics. It is possible to narrow the search results, by sorting and filtering out results by different parameters. The interconnection of metadata provides an opportunity to detect similar objects by particular characteristics and extract them for overview. So, expanding the search capabilities of museum objects on the Victoria & Albert Museum website is currently implemented so that the virtual visitor can search for objects by title, artist, year, place of origin, materials and other features. At the same time, it is now possible to sort out the found objects or search for similar ones, for example, by material, technique, thematic category, or other parameters. In addition, this virtual museum implements the option of searching for all objects as well as for presenting them in better quality or describing them in more detail [2].

An influential trend in recent years has been the publication of digitized objects by museums under a Creative Commons zero (CC0) license, according to which the museum waives rights and fully dedicates these digital objects to the public domain. As a result, the digital objects are becoming usable in any, even commercial, purposes. Among the museums globally that publish electronic objects under the CC0 license are museums such as the Rijksmuseum [3] (The Netherlands), The Metropolitan Museum of Art [4] (USA), State Darwin Museum (Russia) and others. One of the world’s largest museum complexes is the Smithsonian museums, which has published more than 3 million digital objects under this license [5].

At the same time, objects are highlighted to support the user (especially amateur audiences) in navigating the growing number of digital objects, draw attention to especially important artworks and exhibits, and give visitors the opportunity to find out the most valuable, prominent and recognized of the represented digital exhibits. In virtual museums, these special objects may be revealed by different categories of experts such as digital curators, specialists, or museum leaders. Often, search forms for collections are implemented using queries within the Highlights category, for example, as was implemented in the British Museum website [6-7].

Accessibility of numerous museum collections online, as well as the creation of sophisticated search forms, has expanded the possibilities for reusing these materials. Museums began to actively attract researchers to study their collections and objects, as well as to disseminate the knowledge produced by museum researchers. Thus, aimed at a research audience, digital infrastructure is designed and developed via websites. Naturally, sections intended for researchers appeared in virtual museums in the 1990s, but these sections were quite simple because they could only include bibliographic lists on various topics related to the museum and its collections, and arranged electronic catalogs of archives and libraries from the museum’s structure. In the last decade, the opportunities for research have expanded significantly due to the mass representation of online collections, as well as through the publication of research projects on collections, objects, and exhibitions in museums. Smithsonian museums, being the largest museum complex to contribute to the development of the digital research environment, has built a leading platform for conducting research online. In the early 2000s Smithsonian Museums offered a complex of virtual museum portals to conduct research on various topics; then in the 2010s it organized the online environment to focus on fostering research activities [8], sharing gained knowledge with a wider audience of researchers and learners [9] and publishing datasets created by researchers of the Smithsonian museums in various disciplines [10].

In addition to a broad representation of online collections, the possibility of using museum objects in various spheres, including research, was facilitated by the improvement of the quality of digitized images [11]. The multi-format representation of objects and the publication of 3D models stimulated the interest of audiences [12].

Another important trend in the development of virtual museums has been the focus on specific user audiences. Resources are turning to be more concentrated on particular groups, creating and customizing content for visitors of different ages and from various groups, communities, and demographics.

Among digital museum initiatives, educational resources have always played an important role. Initially, these online resources were aimed at the general public, then gradually the focus of creation educational content shifted to more specific audiences. Initially, museums primarily created content to be used by teachers offering assignment sheets and lesson plans drawing on museum content; then resources appeared that were aimed directly at schoolchildren. It is worth emphasizing that in the 2010s the focus became even more precise and materials were specifically designed for visitors from various groups such as children of different ages, teens and adults, undergraduate and graduate students, and other. Prominent examples include the virtual museums of The Metropolitan Museum (New York, USA) and the National Museum of Australia (Canberra, Australia). The infographics devoted to tracing digital initiatives on museum websites based on web archival resources [13-14] show that in the 2010s the majority of website content was intended to be used by children, teens, adults, and also students at different levels. The National Museum of Australia was one of the first globally to  produce family-oriented content. Interestingly, such family activities were intended to be used not only online, but also offline as a joint pastime of children and parents, inspired by museum content [15].

Educational initiatives are diverse in their subject matter and not limited by the pedagogical and didactic capabilities of the represented collections. In the 2010s sections of websites devoted to the museum planning and functioning became an important component. For example, see the multilayered information is represented in the Kunst Historisches Museum Wien project [16]. In this case, educational content becomes more diverse and develops in various directions including discovery of internal museum experiences, which is transmitted to professionals from other cultural institutions and people interested in the operations of museums.

Other aspects of the development of virtual museums are associated with technological breakthroughs in modern times. The most popular are immersive technologies such as augmented (AR), virtual (VR), and mixed (MR) reality that enhance the experience of museum visitors. Virtual reality made it possible to move the experience of a virtual visitor closer to reality. Due to the costly technology and the process of creating high-quality VR-content, many museums prefer not to immediately upload such content onto their website making available for everyone, trying to “recoup” them by showing visitors in a real museum as a part of exhibitions or at special events. However, there are exceptions, for example, the Pushkin Museum of Fine Arts that produces various VR-content available online for free including VR-walks on the campus of museum buildings, VR-tours on the various museum’s exhibitions [17].

Mass digitization and accumulation of content have become the basis for the experiments in the application the Artificial Intelligence (AI) by museums. Of course, AI has gained wider implementation in the space of a physically situated museum, but in a virtual museum environment the utilization is much narrower and began from the use of chatbots.  One of the first such examples was an online chatbot in the Anne Frank House virtual museum [18]. Future breakthroughs in the development of virtual museums will rely on a wider introduction of artificial intelligence to personify the experience of visitors.

The outbreak of the COVID-19 coronavirus and the subsequent pandemic led to the acceptance of extreme measures by national governments related to the isolation of people, and the closure of public institutions for visiting. In these conditions, museums are forced to foster their online presence, generating and enriching already created content, conducting virtual excursions, organizing lectures, seminars, flash mobs, and other sorts of activities on social networks. Undoubtedly, the situation will change, and museums will open their doors to visitors again, but online activities will not be the same, digital initiatives in virtual museums will continue to develop in different directions, to be deeper and wider.

The Virtual Museums and Information Society
Back to Menu
Close Menu