The Deutsches Museum (Munich, Germany) (the official title is Deutsches Museum von Meisterwerken der Naturwissenschaft und Technik or in English it is German Museum of Masterpieces of Science and Technology) is one of the largest museums in the world among museums dedicated to science and technology. The museum was founded in 1903 and now stores and exposes exhibits distributed across 50 thematic collections. For a project on the digital history of virtual museums, the consideration of this museum case is important due to the features of museum collections, which consist of objects in complex association with the processes and principles of science associated with it.

It is especially interesting to pay attention to the specifics of digital identification of the web source created in 1996 . Pages that contained fragments of exhibitions were marked as Deutsches Museum Online. Further, the first pages of the website show that the museum was unable to find a clear balance between the real and virtual environments for the development of museum activities online.

The main idea of the museum was to represent museum exhibitions and the main unit on the site for a long time was the exhibition, in the center of which there was a certain topic, which was revealed through a variety of digital instruments. In the mid-1990s, exhibitions were presented in the form of text, illustrated with photographs of individual exhibits. In the early 2000s, simple text is replaced by hypertext, which implements the possibilities of non-linear interactive navigation through the exhibition, supplementing and overlaying new layers of information.

Since the specificity of the museum is not only in representing objects as exhibits but also in exposing of processes, the developers of the virtual resource initiated embedding of various expressive means available at that time in terms of information technologies to present the exhibition details. Multimedia, which was introduced to the website in the late 1990s and early 2000s, enhanced such visual meanings.

Multimedia expressive means performed different tasks. On the one hand, a visual demonstration of the processes related to the subject of the exhibition, scientific experiment or technology, and on the other, it was an imitation of the interactive participation of a virtual visitor in the process, implemented using simple animations. The museum’s interior space and exterior views were laid out in the “Panorama Views” section as 360 degrees pictures and were available for download. In addition, in 2000 a live broadcast of the “Live Camera” from the museum was embedded into the site, which broadcasted the view of the camera at the main entrance of the museum.

Expressive multimedia tools were intended not only to demonstrate the processes and themes of the exhibitions but also simply to maintain the interest of the virtual visitor using animations (for example one of the animations demonstrated the founder of the museum Oscar von Miller moving his eyes left and right). The uploaded videos, animations and multimedia files simulating complex physical processes and visualizing them were an interesting visible means for representing phenomena and processes. Such attractive technological elements and features can be compared with the cabinet of curiosities two or three centuries ago, which encouraged and supported the curiosity of the visitor.

In 2006, the website was updated and the design changed, but the sections retained their basic structure. Newly created databases of online publications and some catalogs of the museum and the museum’s archive were put on the website, but sections with multimedia were removed. Gradually, digital initiatives became less visible on the website, and the description of the exhibitions was reduced, motivating the virtual user to visit a real museum.

In 2014, with the new design of the website, the approach to the representation of the exhibits changes. Images of objects and their description became more involved in museum storytelling about specific areas of science and technology. Since that time, pages describing objects contain broad contexts of their existence, technological details of functioning and other information.

In the 2010-es, there is a transition that can be observed from the representation of objects in the framework of exhibitions to their presentation in collections. Collections were divided into two main categories of objects such as Machines and Transport, and subcollections formed a hierarchical tree and were itemized according to more particular attributes. The “Exhibitions” section during this period began to focus information only on exhibitions held in the real museum. The new model of organizing information in this section practically loses storytelling online and retains only a few references to examples of exhibits from the collections of the museum.

Previous
Next
The Evolution of the Object's Metadata & Description, 1996-2019 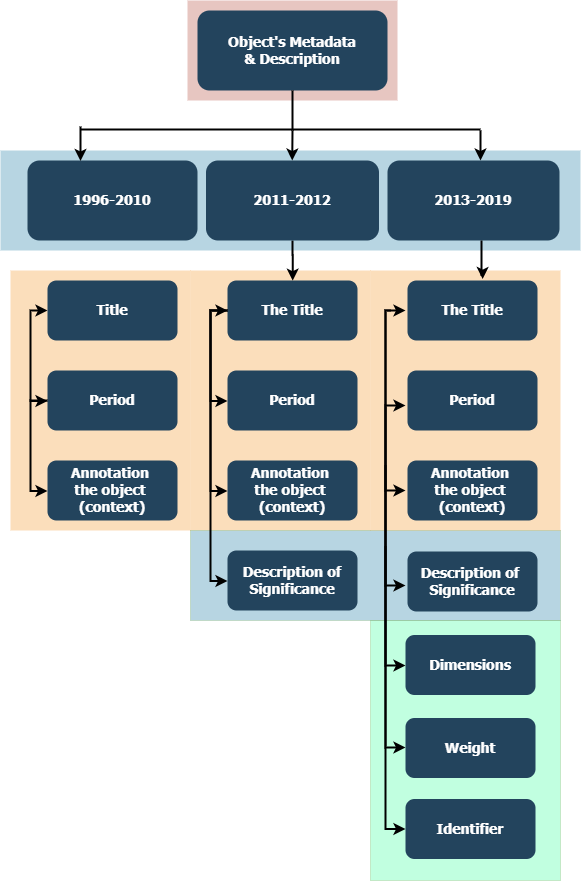 The “Education” section in the 1990s and early 2000s was limited to the opportunities laid down by digital exhibitions, as well as references to external online resources and publications. Initially, research opportunities were limited by the posted list of bibliography and links to web resources of other organizations. Then research capabilities were expanded due to the introduction of a search engine on the website, which could make requests on the objects in the museum’s collections.

To support researchers and educators on the website the virtual museum developers put publications by the museum specialists online in the early 2000-es. Despite the fact that there was no search form for publications, the monographs and articles proceedings were available for download. In the early 2000s, the first descriptions of the museum’s archive collections appeared. The descriptions contained a brief description and contents of the collections, illustrated with separate examples of objects. Some collection’s pages contained embedded databases of objects, for example, microfiches. In 2006, the museum’s library database was embedded to the website, and subscription search in other information systems were attached.

The development of the virtual museum was heterogeneous. With the advent of the website, the virtual space was organized in such a way that the visitor could not only get a general idea of ​​the museum’s activities, but also become a participant in the events through the multimedia content and museum storytelling. However, the virtual museum did not lead to widespread advancement of digital initiatives, probably because approaches to the virtual museum as a “cabinet of curiosities” were exhausted at some point. The digital content of the website does not demonstrate the deep interpenetration of museum activities in real and virtual space. Approaches to the formation of educational and research content and tools were developed in their present form in the early 2000s and are currently supported. Despite the targeted work of the museum with different audiences in a real museum, digital content has not become as oriented in the virtual space. The processes of mass digitization and modern technologies for representing exhibits and processes did not affect the virtual museum at all, which became an obstacle to the further effective development of the digital resource.