The Pushkin Museum of Fine Arts (Moscow, Russia) was founded in 1912 and is currently one of the leading museums in Russia in the development of a virtual museum space. The case of this museum is very important to be considered in this research due to several features of the application of information technology in museum activities and the development of digital initiatives. The use of information technology in the Soviet Union was spread at the level of experiments in some museums, which was mainly associated with the creation of catalogs and electronic registers of museum objects. The Pushkin Museum was able to very quickly move towards the utilisation of digital instruments and become one of the first museums in Russia to create a virtual museum in the late-1990s.

The use of information technology in the museum was boosted in middle of 1990-es when the museum became one of the initiators of the Association for Documentation and New Information Technologies in Museums (ADIT) in 1996, which has become one of the most important professional communities on museum informatics. The reconstruction of the early history of the virtual museum was possible due to the development of the non-profit initiative such as Museum.ru , which provided Russian museums with the virtual space to create museum web-sources on the Internet. The earliest version of the Pushkin Museum website at the Museum.ru platform, documented by the Wayback Machine web archive, dates back to 1998. Museum.ru non-profit initiative was created on the basis of a partnership between museums and the IT sector to develop and promote a virtual cultural and museum environment. The Museum.ru platform offered not only templates for creating the site, but also adding to the catalogs of museums and digital initiatives related to museum activities. The first version of the website of the museum included a range of features to be used online by the general public as potential visitors of a real museum and some digital initiatives that helped us to identify the web-source as a virtual museum.

Being created in the late 1990s, the first website did not receive dynamic development. The news update was not accompanied by the addition and expansion of digital content in the 2000s. In the mid-2000s, the museum went beyond the existing website on the Museum.ru platform and began to create more sophisticated resources for presenting exhibitions and storing information about them.

In 2011, the museum created a website where various digital initiatives were implemented, and since then more attention has been paid to the development of the virtual resource.

The first version of the virtual museum contained a link to the collection database of the museum, but the page deeper contained only a general description of the museum’s collections illustrated by the examples of some significant annotated objects. The description of the objects was standardized and contained metadata such as name, geography, date, materials, dimensions, origin and textual annotation about features of the object and a short historical context.

In 2009, a new website was announced, and the first snapshots of this resource were documented in 2011. A new approach to presenting collections and objects in a digital environment appeared on this website. The museum’s collections were distributed by thematic principle, but in order to view objects, it was necessary to choose the country to which culture the object belongs. Originally, digital collections were presented as separate examples of art masterpieces, then, in 2016, full digitized collections appear on the site. The first pages with digitized objects contained a very brief meta-description, and the image quality of the presented objects in 2011-2015 is difficult to evaluate, because the crawler of the web archive did not carefully process these pages.

In the 2010s, the main policy of the museum in relation to digitized collections has been the creation of separate websites for the collections. In 2014, a page appeared with museum websites dedicated to individual collections. In 2016, these websites obtained extended content. By 2015, 7 such websites representing individual collections of the museum were created. Despite the fact that the collections were created on separate websites, they had much in common with each other in the content structure. For example, the sites implemented the ability to select objects by chronology and subject.

Despite the similarities in the structure of the collections’ websites, pages representing digitized objects differed significantly, primarily in terms of meta-description of objects. Also, in the case of a number of resources where the objects were linked, examples related to the subject or type of the object were presented on the page of the object.

Despite the fact that the museum website does not have a single search for all collections, such a search can be carried out on the website of the State Catalog of the Russian Federation (the museum website has a link to the Catalog). As of November 15, 2019, the catalog contains 148,523 objects with images and a description.

Previous
Next
The Evolution of the Object's Metadata & Description, 1998-2019 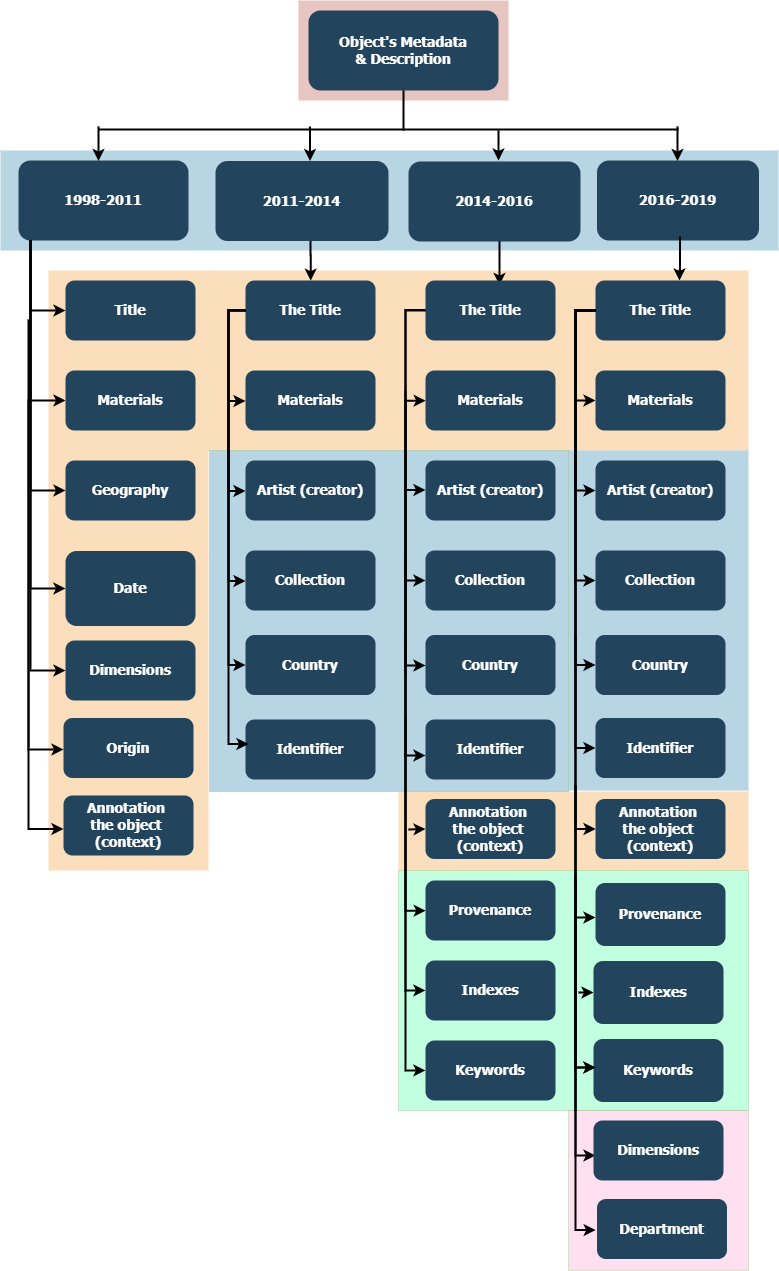 In 2001 the first stories devoted to the history of the museum appeared on the museum’s website. Museum storytelling began to develop precisely from museum history, since the events of Russian history of the pre-revolutionary period, the revolution and crucial changes in the Soviet period were critically important, and often they were even tragic, which also indirectly affected the digital history of the virtual resource and its content.

For a long time museum storytelling on the electronic resources of the museum was a rarity, but with the advent of websites dedicated to individual museum collections, the situation has changed significantly. Web resources dedicated to collections were complex, and museum storytelling was a significant part of them. The stories described different sides of the topic that the digital collection was dedicated to. Unfortunately, not all websites had English versions, despite the relevance of the materials represented on a global scale.

Museum storytelling took various formats, and most often referred to museum collections or exhibition topics. Since 2012, with the development of a meta-description of digital objects and the implementation of their binding to thematic sections, stories are variously illustrated on the basis of digital collections.

The developers of the museum website did not clearly indicate which audiences they were focused on creating the materials. At first the category “Specialists” was indicated. They were intended to be the specialists in museology, for whom the materials on the history of the museum, tables with a chronology of exhibition activities were created. Then this information was transferred to another section of the website, and the category “Specialists” as the website’s audience was removed from the menu.

Despite the fact that after 2000 user audiences were not named in general the created and developed digital content implied opportunities for use in education and research. The potential for use of the websites for these purposes varied at different stages of the development of the virtual museum environment, and depended on the content of the collection database and the variety of presented materials, including bibliography, indexes, glossaries and research publications. Wider opportunities for using resources were created after 2011 when the number of digitized collections expanded and an advanced search on collections appeared.

In 2018 the structure of the museum’s main website changed again with new sections appearing, including “Education & Science“. This section includes various types of museum activities, both in a real museum and in a virtual format. The “Virtual Academy” section contains educational courses of a basic and advanced level for studying online.

With the creation of the first web resource, developers had an understanding of the need to present a real museum space in digital form. So the first virtual tours appeared, which were quite simple to perform, but the user could get an idea of the navigation in the museum and the main specifics of the museum’s halls and expositions there. Navigation on some floors was accompanied by a plan with hyper links to the description of the halls with photographs of the exposition, including panoramic photographs. Unfortunately, it is impossible to assess the quality and significance of these photographs for understanding the features of the formation of expositions from the late 1990s – early 2000s, since they were not captured by the scanner web archive.

In the mid-2000s, the museum went beyond the existing website on the Museum.ru platform and began to create more complex resources than was provided for by the templates of the mentioned platform. New resources are created to represent exhibitions and preserve information about them.

In the second half of the 2010s, the museum places particular emphasis on creating a variety of VR-content for the museum. The “Virtual Pushkin Museum” section presents virtual expositions with navigation through the museum halls. VR-content is also designed to view past exhibitions and walks around the museum complex; audio and media guides, as well as mobile applications for VR, are created and available online.

An important part of the museum’s activities is now the creation of VR-reconstructions, in particular, the restoration of the space of the State Museum of New Western Art, the country’s first museum of modern art that existed in 1923-1948. The museum’s collections included masterpieces of art in Western Europe, mainly represented by impressionism and post-impressionism. In 1948, the museum was closed for ideological reasons, authorities and works of art from the museum were dispersed among the collections of various museums in the country. The Pushkin Museum managed to create high-quality reconstructions of the halls for different periods of their existence with historical accuracy.

Being created in the late 1990s, the first website did not receive dynamic development. The news update was not accompanied by the addition and expansion of digital content in the 2000s. In the mid-2000s, the museum went beyond the existing website on the Museum.ru platform and began to create more sophisticated resources for representing exhibitions and storing information about them. So, new resources exist independently of the main museum web resource, and therefore the virtual environment of the museum is characterized by decentralization, which is a feature of the virtual environment of this museum for the next decade. The concentration of collections on different resources made it impossible to simultaneously use resources and search for objects on a set of collections, which was a significant limitation for the museum digital environment. The museum actively uses other platforms to promote its digital online initiatives, including educational courses. The features of museum storytelling, the creation of VR tours and VR reconstructions show the attentive attitude of museum resource developers to its museum history, history of museum collections and the prospects for future growth. In addition, the originality of virtual content reflects the specifics of understanding a virtual museum as a virtualized real museum with the possibility of immersion in its real environment through digital technologies.